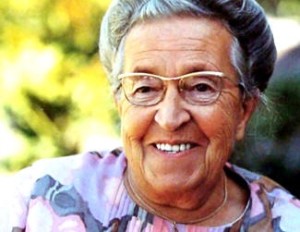 When I think back over my touring days, one of the highlights was that of meeting Corrie Ten Boom. In case you don’t know who she is, she is a holocaust survivor and wrote a number of inspirational books, the most popular being “The Hiding Place.”

Back in 1974, I was on tour with a group called “New Hope” a small group sent out by the Continental Singers organization. We spent almost five months in Holland doing concerts in schools, churches and public venues.

I had been introduced to “The Hiding Place” and was reading it while there. This added so much realism to the experience. The night I finished reading the book we were actually in Haarlem, the town where the Ten Boom family lived. I put down the book and we walked a few blocks from where we were staying to the Ten Boom Watch Shop. It was late and as I walked those dark streets, I could sense the unfathomable history that was lived out by the people who walked them years before. The shop was closed, but we returned the next day and it was open for business. I guess we really didn’t look like customers as we gawked around the place. The owner asked if we would like a tour? What an opportunity! They called someone to come over to show us around. They were preparing to make it a museum, but it was not quite ready to be open to the public. 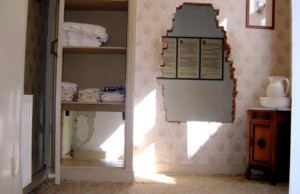 The shop was on the ground floor and there were two or three levels above it where the Ten Boom family had lived. It was here that they built a secret room where they helped hide Jews from the Nazi soldiers. All the scenes so explicitly described in the book were right there before me. The relationship of the rooms and how they were laid out was integral to the story and how the room was kept secret.

It was great to have a personal tour and be able to ask questions about the family and how it remained a watch shop. I bought a watch there that I kept for many years.

Later in the tour, we were talking with one of the pastors of a church we had visited and she asked if we would like to meet Corrie. We jumped at the chance. We started with a visit to her home. She was quite a feisty lady at 82. When I nervously told her that I enjoyed her book, she said, “Which one?” She was always ready with an illustration and gave us all a spiritual lesson that day. Then, we got to sing the song “Through It All” for her.

The Billy Graham Association was in the process of filming their movie of “The Hiding Place” and Corrie said, would you like to go to the set? Again, we were quite eager to oblige. It was springtime, but the scene they were filming was set in winter. To make it look like snow, they had drifts of salt all over the street. 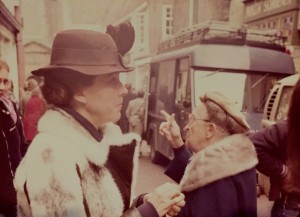 Corrie just marched right onto the set and had a few conversations with the cast and crew. I managed to snap a picture of her with Jeannette Clift George, the actress who played her in the movie. It was a surreal experience.

I remained friends with the pastor’s family and visited there on later tours. I am friends with their daughter to this day on Facebook. These memories are a treasure to me that I visit often as situations usher them to the forefront of my mind.