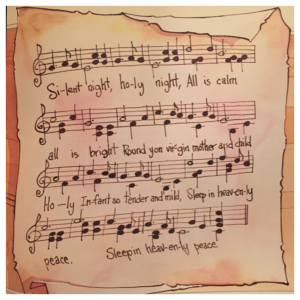 Just about the time many people are ready for Christmas to be over, much of the world is just getting started celebrating the birth of Jesus. About the most any of us know about the 12 days of Christmas is the song. The celebration actually starts with Christmas Day as Day 1 and the 12th day is the eve of Epiphany. That is the day set aside to celebrate the arrival of the Magi.

For my own celebration this year, I’ve decided to write a short blog post for each of the 12 days of Christmas and feature a carol for each day. There may be a back story about the carol, a personal story related to it or some insights learned from the lyrics.

For the “First Day of Christmas” I think it best to start with what I believe to be the most beloved carol of all, “Silent Night.”

You may have heard the story about how it came to be written. Some claim that this is a fable, but there are many who hold to the story as fact. At any rate, here’s the synopsis:

In the Austrian town of Oberndorf there was a quaint little church that just happened to be named, St. Nicholas Church. The pastor was Joseph Mohr and the organist and choir leader was Franz Gruber. As they were preparing for their traditional Christmas Eve service in 1818, they discovered that the organ was broken and there was no time to get it repaired. It looked like the service was ruined along with the organ. However, the situation led Joseph Mohr to write some lyrics and Franz Gruber set it to music with only a guitar for accompaniment. The result was the carol we all know and love.

Now for the rest of the story…

The following spring, the organ repairman made his way to Oberndorf. Having heard about the organ-less service and the beautiful song, he asked for a copy of it. Franz gave him one, but it didn’t have the names of the writers on it. Before long, the song was spreading all over the German-speaking parts of Europe, into Russia and eventually across the pond in America. It was thought to be an anonymous folk song. After thirty six years, a government investigation revealed it’s true origin.

I had heard this story for a long time and a number of years ago, came up with an idea for a children’s book about the mice who chewed through the bellows of the organ and therefore helped bring about the writing of the song. I shared it with a friend, Betsy Hernandez and we co-wrote the book. The original is now out of print, but can be found on eBay from time to time. It’s called “Silent Night – A Mouse Tale.” Recently, I was able to get it reprinted and it’s available here in my store and on Amazon.

There are many lessons I glean from this story, but there is one that rises to the top for me. It concerns the sovereignty of God. Often, it is when all seems lost that He reveals Himself in ways that not only minister in the moment, but goes on to touch the lives of many others. Rarely do we see the full extent of what God does with the ordinary and sometimes painful circumstances in our lives.